The reason for Mu2e in 60 Seconds 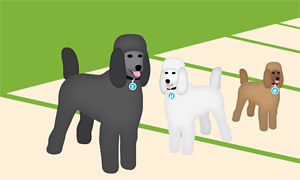 You might not think about dogs while you wonder about particle physics, but there are similarities. Poodles, for example, also come in three sizes — toy, miniature and standard — but they're all the same breed, and genetically similar. Learning how poodles and other breeds are related helps us understand the rules of dog genetics.

We want the same type of understanding of how elementary particles relate to one another. Quarks can change from one type to another; so can neutrinos. If you want to have any sensible "laws of genetics" for particle physics, that last breed, the charged leptons, had better be able to change types as well. That's called charged lepton flavor violation. Surprisingly, physicists have never seen it happen.

Previous experiments have looked at about ten trillion muons; Fermilab's Mu2e experiment will observe 10,000 times more data, looking for a change from a muon to an electron. Discovering this change would point us toward a single theory explaining the genetics of the particles born in the big bang. If we don't discover this change, there will be a lot of head-scratching (as opposed to fur-scratching) as we try to understand the rules of the universe.

The Mu2e experiment is looking for evidence that a muon can change into an electron and nothing else. Observing muon-to-electron conversion would be a major discovery and would signal the existence of new particles or new forces of nature. Mu2e can search for this new physics at energy scales far beyond the reach of the LHC — up to the energy scale of 10,000 trillion electronvolts, or 10,000 TeV. The LHC has an energy goal of 14 TeV. Mu2e conversion could give the next generation of colliders an indication of the most promising, discovery-laden energy ranges to search.

At lower energy scales, if the LHC finds new particles, it may have a difficult time distinguishing how these particles originated without the help of Mu2e. There exist many theories that address shortcomingsin our current understanding of sub-atomic particle physics. For example supersymmetric theories postulate a whole new class of particles, extra dimension theories postulate new space-time dimensions, while other theories include new forces. The observation of muons morphing into electrons would help narrow the number of plausible theories. Such an observation would give context and insight to the results of the LHC.

If Mu2e physicists get a "zero" result, meaning they don't observe muons changing into electrons, it will cast doubt on many of the existing theory models. Physicists would have to rethink their ideas about how the forces of nature unify at higher energies, as they believe happened at the time of the Big Bang.

With an upgrade, using an improved accelerator, Mu2e could expand its search for charged lepton conversion and other new physics by another one or two orders of magnitude.

Observing muon-to-electron conversion is central to understanding what physics lies beyond the Standard Model.

Physicists already have discovered that two of the three categories of elementary particles — neutrinos and quarks — change into different particles, a process called flavor violation. Proving the same process in this third particle category, charged leptons, which includes muons, remains a hurdle to understanding why particles in the same family decay from heavy to lighter mass states. Physicists have searched for this since the 1940s. Going beyond the Standard Model will help scientists unify the forces of nature, which dictate how particles interact. This unification is key to explaining how the universe changed from being dominated by the energy and radiation left over from the Big Bang to include visible matter, such as people and plants.

Muons are a heavier cousin of the electron — about 200 times more massive — but physicists are not clear how the relationship between electrons and muons works. Observing muon-to-electron conversion can help clarify how particles created at the beginning of the universe broke down into stable lighter particles. Understanding this relationship will help physicists learn more about the particles themselves and the forces that govern their interaction.